In January 2016, RightScale surveyed 1,060 technical professionals across a broad cross-section of organisations about their adoption of cloud computing.

The survey questioned technical professionals across a broad sample of organisations about their adoption of cloud infrastructure.

The 1,060 respondents range from technical executives to managers and practitioners and represent organisations of varying sizes across many industries. Respondents represent companies across the cloud spectrum, including both users (17 percent) and non-users (83 percent) of RightScale solutions.

A Cloud Maturity Model was developed to segment and analyse organisations based on their levels of cloud adoption: Cloud Watchers, Cloud Beginners, Cloud Explorers and Cloud Focused. Small-medium businesses made up 59% of respondents. 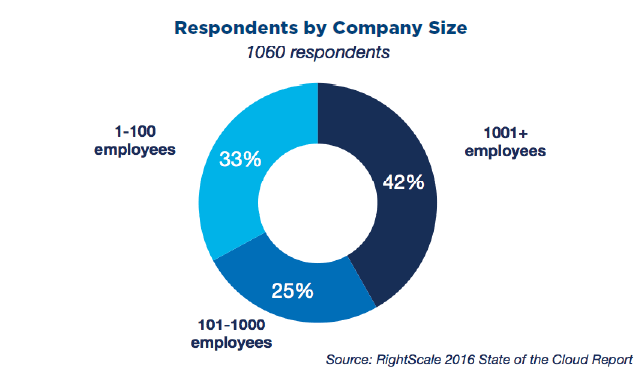 The survey on which the RightScale 2016 State of the Cloud Report is based includes organisations across all the stages of cloud maturity. 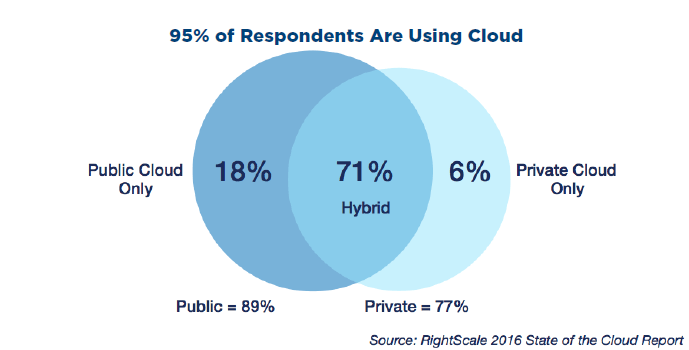 A public cloud is one based on the standard cloud computing model, in which a service provider makes resources available to the general public over the Internet.

Public clouds are used extensively in offerings for private individuals who are less likely to need the level of infrastructure and security offered by private clouds.

The main benefits of using a public cloud service are:

Private cloud is best for businesses with dynamic or unpredictable computing needs that require direct control over their environments.

The main benefits of using a private cloud service are:

Hybrid cloud is a cloud computing environment which uses a mix of on-premises, private cloud and third-party, public cloud services with orchestration between the two platforms.

Hybrid cloud models can be implemented in a number of ways:

The main benefits of using a hybrid cloud service are:

Infrastructure as a service (IaaS) refers to online services that abstract the user from the details of infrastructure like physical computing resources, location, data partitioning, scaling, security, backup, etc.

Azure is a cloud computing platform and infrastructure created by Microsoft for building, deploying, and managing applications and services through a global network of Microsoft-managed data centres.

Platform as a service (PaaS) is a category of cloud computing services that provides a platform allowing customers to develop, run, and manage applications without the complexity of building and maintaining the infrastructure typically associated with developing and launching an app.

Google App Engine is free up to a certain level of consumed resources. Fees are charged for additional storage, bandwidth, or instance hours required by the application.

Each box comes with full root access, a choice of operating systems, and the ability to customise the setup.

The results indicate whether a respondent is using any cloud but do not specify the number of applications that are running in each cloud.

As expected, AWS continues to lead in public cloud adoption, with over half of respondents currently running applications in this cloud. The percentage of respondents running applications in AWS was flat this year, although, per reports from Amazon, the number of workloads in AWS is increasing. Azure IaaS and PaaS both showed increased adoption, narrowing the gap with AWS.

DigitalOcean and Oracle Cloud were added to the survey for the first time this year. One can also gauge interest and potential for future adoption by measuring respondents that are experimenting or planning to use particular clouds.

This year Azure IaaS and PaaS stand out with a higher percentage of respondents experimenting or planning to use those clouds. This could indicate the potential for Azure to increase adoption in future years as these experiments and plans come to fruition.

This year, IaaS and PaaS for Google and Azure were looked at separately as well as together.

Comparing this year’s data with last, we see that AWS saw a small dip (61 to 58 percent) year-over-year in adoption by Small-medium business. There were significant increases in adoption of Azure IaaS (9 to 13 percent) and PaaS (6 to 10 percent). Small increases in VMware vCloud Air and IBM SoftLayer (+2 percent).

Public cloud adoption patterns remain different between larger enterprises and smaller organisations. AWS remains in first place across both segments, followed by Azure IaaS and Azure PaaS. In the Small-medium business segment, Google App Engine is #4 followed by DigitalOcean at #5.

The 2016 State of the Cloud Survey reveals that adoption of private cloud is growing across all providers.

VMware Inc. is a software company that develops many suites of software products specially for providing various virtualization solutions.

vSphere is a software suite that is classified as a data centre product. vSphere is similar to Microsoft Office Suite, which has many types of software like MS Office, MS Excel, MS Access and so on. vCenter server is similar to vSphere client but it’s a server with more power.

vCenter server is installed on a Windows Server or Linux Server. VMware vCenter server is a centralised management application that lets you manage virtual machines and ESXi hosts centrally.

OpenStack is a free and open-source software platform for cloud computing, mostly deployed as an IaaS. OpenStack lets users deploy virtual machines and other instances that handle different tasks for managing a cloud environment on the fly.

The software platform consists of interrelated components that control diverse, multi-vendor hardware pools of processing, storage, and networking resources throughout a data centre.

Bare-metal cloud is a public cloud service in which the customer rents hardware resources from a remote service provider.

One of the major benefits of the bare-metal cloud is the flexibility it provides. Businesses can customise a bare-metal cloud based to meet their unique requirements and troubleshoot applications without having to worry about neighbouring virtual machines (VMs).

The bare-metal cloud works well for big data applications or high-transaction workloads that do not tolerate latency.

In comparison to last year, there were noticeable increases in adoption rates of every private cloud technology. Year-over-year, several vendors made strong gains. VMware vSphere/vCenter was up from 23 to 32 percent, OpenStack rose from 10 to 17 percent, CloudStack more than doubled (6 to 13 percent), and VMware vCloud Suite doubled (6 to 12 percent).

Private cloud adoption by smaller organisations is lower overall than enterprises. While VMware vSphere/vCenter (32 percent) is still the top option, OpenStack took second place in this group with 17 percent already running applications. Bare-metal cloud, in its first year on the survey, was the third option for Small-medium businesses.

In the twelve months since the last State of the Cloud Survey, we’ve seen strong growth in hybrid cloud adoption as public cloud users added private cloud resource pools. 77 percent of respondents are now adopting private cloud up from 63 percent last year. As a result, use of hybrid cloud environments has grown to 71 percent. In total, 95 percent of respondents are now using cloud up from 93 percent in 2015.

The 2016 State of the Cloud Survey shows that cloud adoption is growing and hybrid cloud adoption has now hit its stride. The strong growth in the use of private cloud, combined with the ubiquity of public cloud means that a super-majority of organisations are now operating in a hybrid environment. Cloud benefits continued to grow, with the strongest gains in speed-to-infrastructure and speed-to-market. 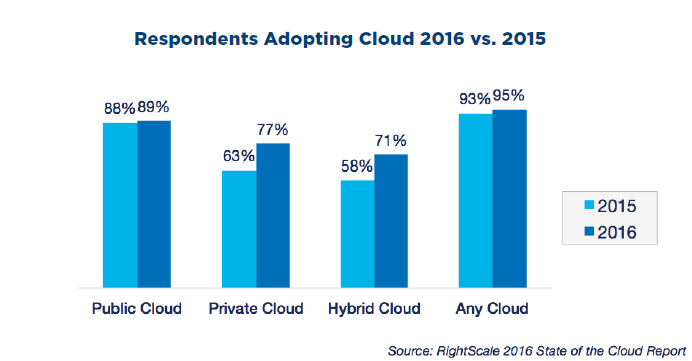 Cloud Beginners saw the greatest gains this past year as cloud best practices became more established and cloud providers improved their offerings. With increasing maturity of both cloud users and cloud providers, we are seeing a reduction in concerns about cloud security, but IT organisations are challenged by a shortage of trained resources that they will need to fuel this growth.

As adoption grows, cloud bills and cost concerns are also growing, but most organisations are doing little to implement cost management and optimisation strategies. This represents an opportunity to reduce costs and further improve cloud ROI.

In the coming year, enterprises and newer cloud users are looking to move additional workloads to the cloud, while more experienced cloud users plan to optimise existing cloud usage to reduce costs.

There are strong leaders in both the public and private cloud sectors which are sure to boost cloud adoption by Small-medium businesses and nurture the growth of hybrid models.